An Advocate of Blue

The most amazing and hope evoking news of last week was; on June 8th World Oceans Day, the World Record Holder Free Diver Şahika Ercümen, who has dived in many places from Lake Salda of Turkey to Antarctica to draw attention to issues such as environmental pollution, plastic usage and global warming, was designated “UNDP Turkey’s Life Below Water Advocate”. The United Nations Development Programme (UNDP) Turkey, in its aim to continue to cooperate with leading successful personalities in the society to assume advocacy for the 17 Sustainable Development Goals (SDGs) to encourage individuals and institutions to take action on important matters affecting the world and humanity.

I have been fortunate to witness Şahika`s success as a diver and her passion to save our oceans and marine biodiversity as she relentlessly partners in global projects. Şahika`s approach enabled impact and social value creation which inspired me to implement the social missions fort he projects I have developed for the denim industry. It is no surprise that what brought me and Şahika together was the color blue. Back in 2011, I had overheard a conversation from the next table as we were having dinner in Bozburun in– a paradise on the Aegean Coast in Turkey and Şahika was talking about one of her deep blue dives as she was training and her passion for the oceans and my love for indigo became the common bond as well as a discussion for a possible project. Şahika was a World Record Holder Free Diver and I was a manager in the denim industry and we both wanted to create an awareness for waste in the oceans, endangered marine life and loss of biodiversity and climate crisis. We co-developed the Protect Water Project for Orta Anadolu; the company I was working for at the time and started the field work immediately. Blue of the oceans and denim was at the core of our project.

The recent worldwide event, the climate crisis urgency has assured all global citizens that we cannot expect all the solutions from governments or NGOs. It is viable to construct new business models where investments, marketing expenses, communication projects are guided with roadmaps attending to the environment, community and humanity and taking all stakeholders on board. One of the critical success points in an impact project is to have the stakeholders engage in the experience of the process directly. Denim industry uses water as a key resource and wastewater is also a major output of the manufacturing processes. In the life cycle of a pair of jeans consumes 3700 liters of water (www.levistrauss.com/wpcontent/uploads/2015/03/Full-LCA-Results-Deck-FINAL.pdf) In order to deliver a dialogue around water use, right after an industry event, we had offered “Swim Like A Dolphin” led by Şahika to the denim industry designers and buyers in NYC where the participants experienced holding their breath underwater, swimming with mono-fins as well as discussing water as a resource for the denim and jeans industry.

The project was a step forward than simply creating an awareness as we could not only had a possible impact on the post-experience behavior of the participants as well as defining the future value of the project. We had used a similar approach in the Indigo Turtles Project where this time a brand; Mavi Jeans, an NGO; EKAD working on preserving the life of endangered Caretta Caretta sea turtles and Şahika partnered to bond marine biodiversity and indigo. “Indigo Turtles” enabled multiple benefit orientation and social value creation where the supply chain could collaborate with citizens to implement environmental awareness as a part of popular culture and contribute to save the life of an endangered species.

As like many of us, during the last 3 months of global lockdowns, I questioned my persona values, sustainability of the global fashion supply chain, our common ground, partnerships, dependencies, humanity more in pursuit of a meaningful future. Today we need to have leaders and muses like Şahika who intrinsically engage and inspire the business world, its stakeholders and citizens as the value they create is not a one-time transaction but an evolving, collaborative engagement on an impact platform.

This week’s Indigofriend is Şahika Ercümen whom we call “Mermangel” – the combination of a mermaid and an angel of the blues. 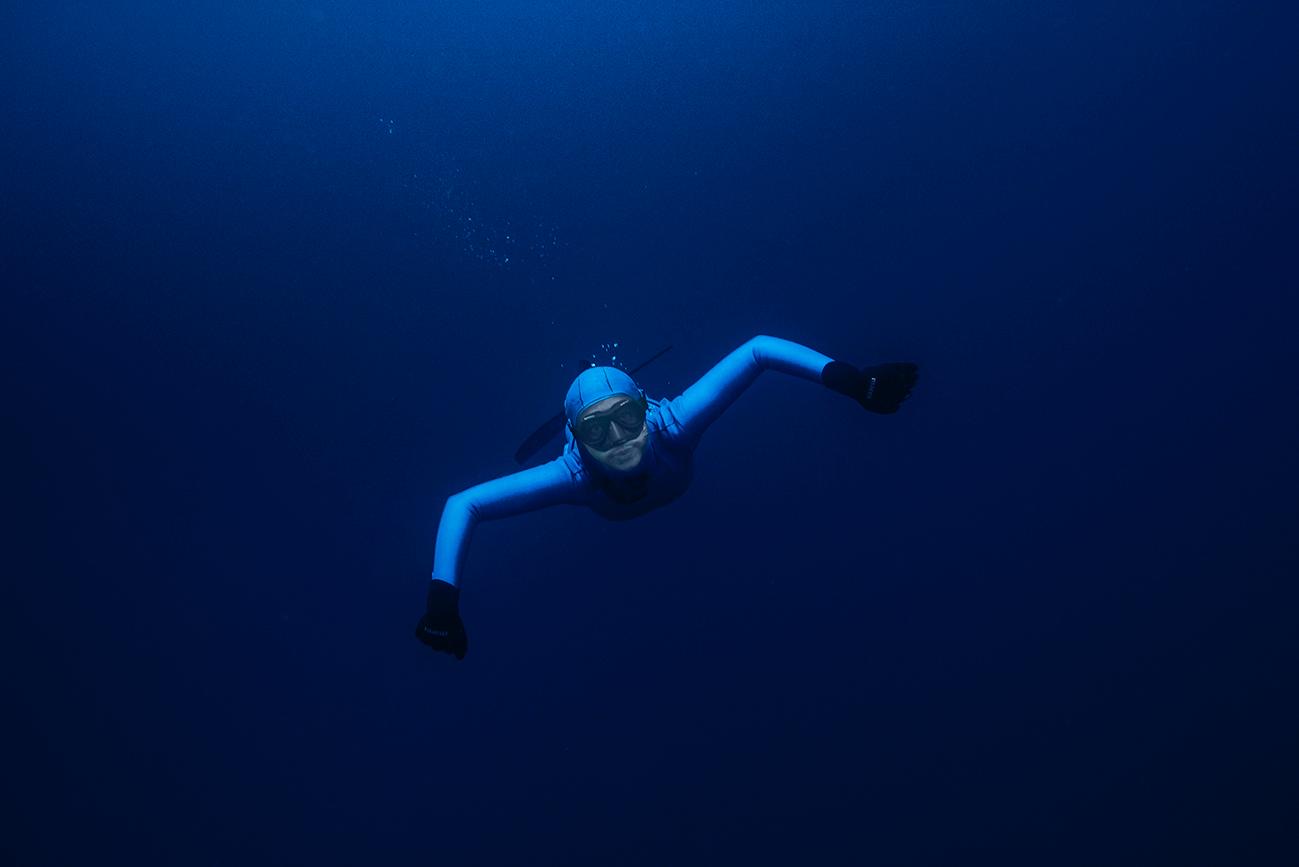 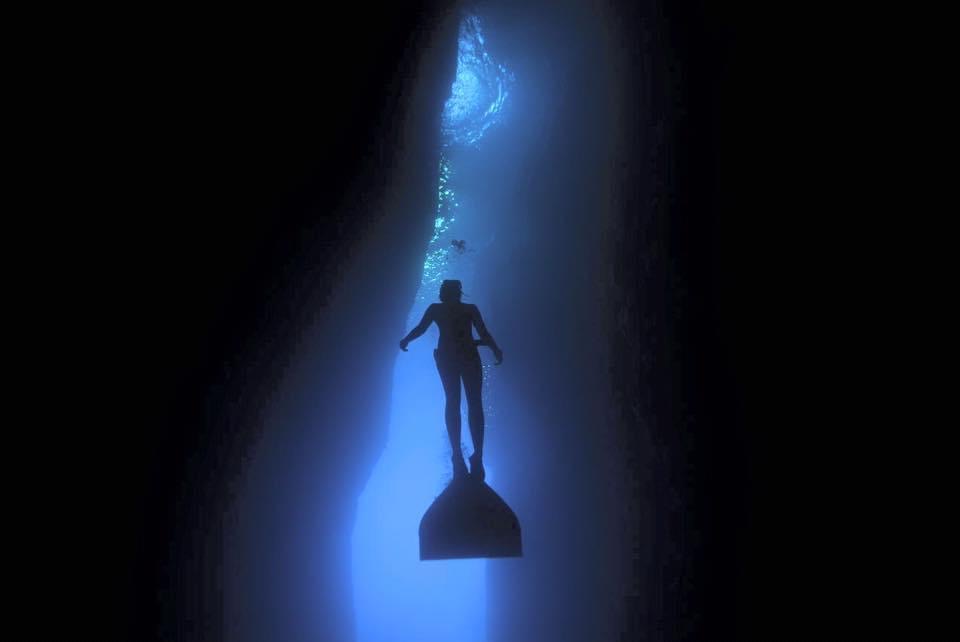 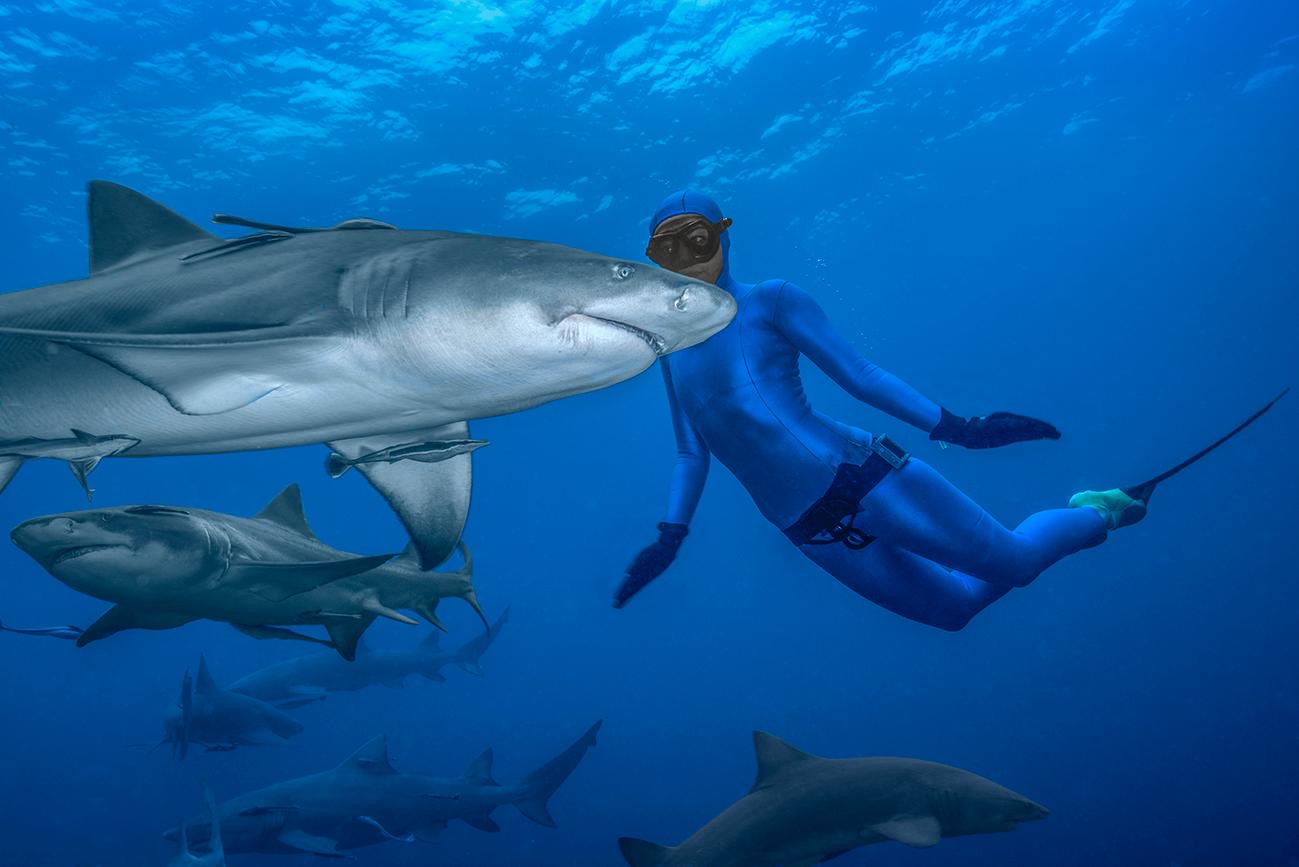 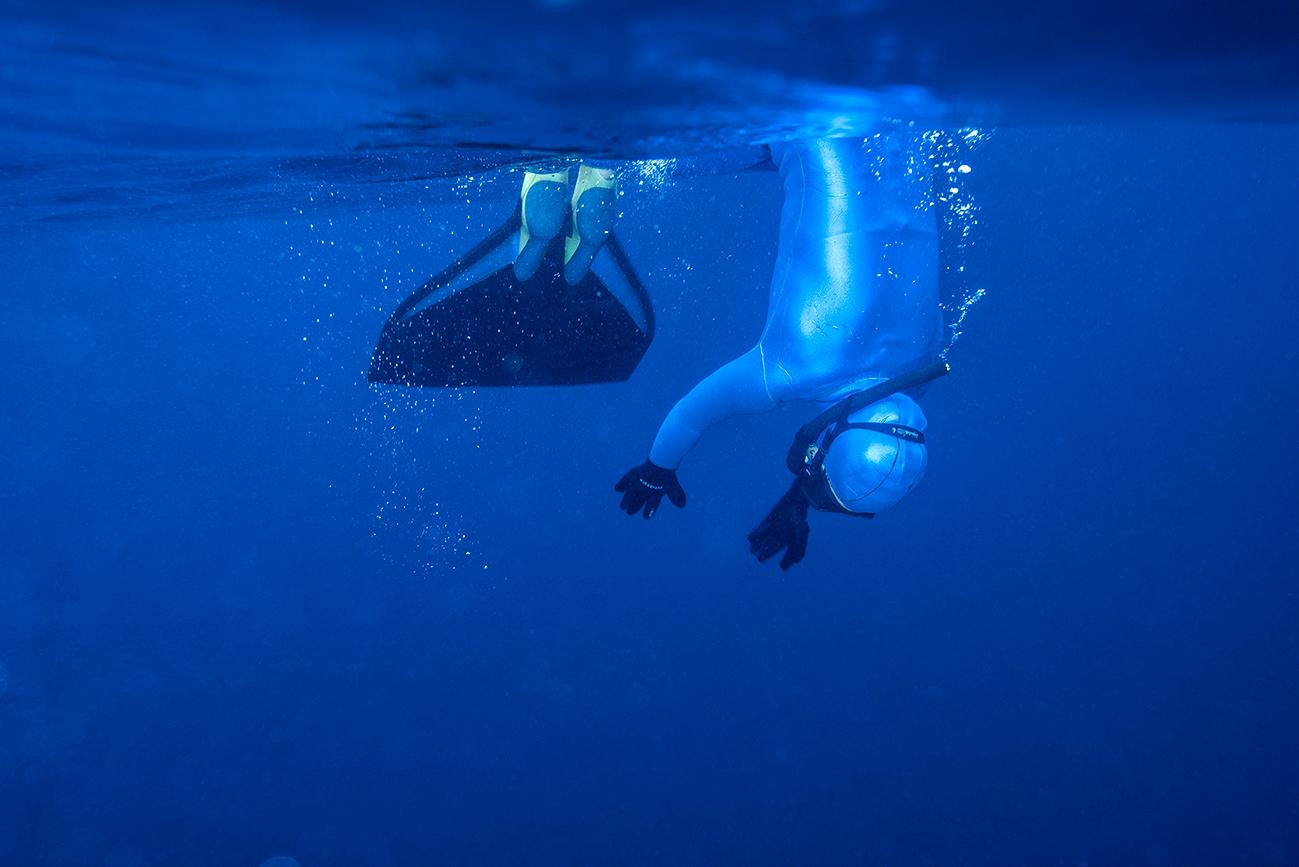 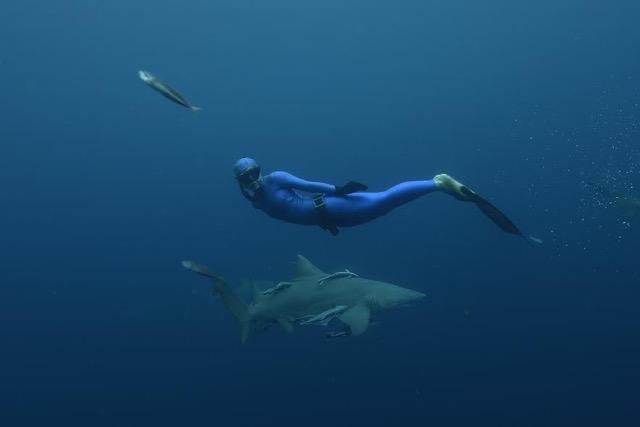 IF: Congratulations on being the “UNDP Turkey’s Life Below Water Advocate” – What will this mean for your future work?

Şahika Ercümen: From the first day I started diving I followed what Gandhi advised “Be the change you would like to create” I have dedicated each and every one of the records I have achieved to a social cause. Zero Waste Blue project in Turkey and the pool dive in Italy to draw attention to plastic waste, the record dives and trainings in the lakes in Turkey were all targeted to create and awareness and be an inspiration for the conservation of marine life. UNDP SDG program has acknowledged my efforts and I have become, UNDP Turkey’s Life Below Water Advocate in relation to the SDG 14. We are stronger together. We have many dreams and goals. Training materials, underwater photography, videos, talk, seminars…The common goal here is to protect our precious water resources and create and awareness for their sustainable use to create permanent positive change.

IF: You hold many World Records and you dive in many global places. The 110 m (360 ft) long dynamic apnea under ice (DYN) which found entry into the Guinness Book of World Records for both for men and women, constant weight with fins at sea (CWT) discipline with 70 m (230 ft), CMAS-recognized world record diving 60 m (200 ft) deep in variable weight apnea without fins at sea (VNF), 61 m (200 ft) in saline soda waters of Lake Van, eastern Turkey (recognized by CMAS, Horseshoe Island dive in Antarctica are some of the many records you hold. Which of these experiences stand out for you and what do you feel when you break a record?

Şahika Ercümen: The dive that was most notable for me was the Antarctica expedition – the world of the penguins, sea lions, whales – at extreme conditions and yet in the heart of the wild-life.

Şahika Ercümen: Unfortunately, we are living in the plastic age. By 2050 it is expected that there will be more plastic in our oceans than fish. We have to engage with personal, local, global solutions at once and we have to take a holistic approach. To give an example it could be the local municipalities job to collect waste but are we being a part of the solution and separating our waste at home before we dispose of them? Are we washing our jeans after a few times of wearing? Are we using our own shopping bags made of recycled or ecological materials and mugs instead of single use plastic bags and paper cups?

IF: You have partnered with the denim industry. What did you aim to achieve with these projects? You have collaborated with various industries – was denim any different? What would you like to say to the denim manufacturers and consumers?

Şahika Ercümen: I have started my collaborations with the denim industry with you J I still remember how happy I was when you said “Let`s protect our seas” and we have taken underwater videos and photographs in Egypt. We have presented our projects in NYC and Berlin to the denim industry. We worked to protect the biggest nesting area and the second biggest in Mediterranean region for the indigo turtles. Working together with such a sensitive business leader, has motivated me to work together with many other global projects. As we know denim has a waste-water problem. I really care about the manufacturing and the consumption processes of our beloved jeans. I have also collaborated with Levis as they draw attention to water scarcity as well as working on innovations to spend less water in jeans production. The Wellthread Collection (www.levistrauss.com/2015/10/06/introducing-the-levis-wellthread-collection) where they have used hemp blends that require less water use in growing as well as the Waterless jeans project (www.levi.com/US/en_US/blog/article/how-we-make-jeans-with-less-water/) where they use ozone in garment finishing are progressive examples. We have connected with the consumers to suggest airing jeans instead of washing frequently as well as drying in the sun after wash. We have also partnered in the “Zero Waste Blue” project together with an NGO called TURMEPA who aims to keep our seas clean, Environment and Urban Ministry and we worked with younger generations for beach cleaning organizations. We tailored environmental trainings to stop wasteful use of water and to promote recycling as well as efficient use of water resources. We collected 26,5kg of plastics, 13kg of glass, 8,7kg of metal, 17,5kg of paper, 4889 butts totaling in 65,7kg of waste in just a few hours. Being an UNDP advocate, we have global project plans and will work for a planet that can breathe till our last breath.

IF: Lastly; your favorite pair of jeans?